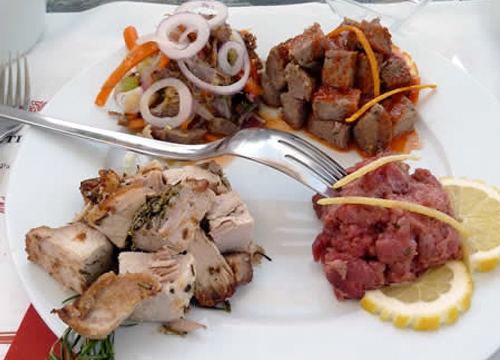 Today is my 16th anniversary of marriage to my wonderful wife Meg. We honeymooned in Tuscany, Italy for a couple of weeks back then enjoying the beautiful landscape while dining on exquisite food. So I thought it only appropriate to post this article from Greg Cerretani, the culinary student who received the 2011 Reluctant Gourmet culinary grant in association with Chef4Students.org.

Greg and his wife also spent time in Italy on their honeymoon (many years after Meg and me) and he wrote about his dining experience at the butcher shop of Dario Cecchini in Panzano. Greg is a wonderful writer as you will soon see and I’m hoping to get him to contribute more in the future. He is back in the States and last I heard was happily working in Boston at Barbara Lynch’s restaurant, Sportello.

So sit back and enjoy his story.

In the small town of Panzano in Chianti, Italy there is a red and white striped building with a statue of a cow painted with a floral landscape across the street.  This building is the butcher shop of Dario Cecchini and the site of two of the best meals I have ever had.

The first time I visited Italy was on my honeymoon with my wife.  My wife had made arrangements for us to go on a wine tour of the Chianti Classico Region with Tuscan Wine Tours.  After spending the morning through early afternoon sipping wine and sampling treats, like chocolate olive oil and wine-filled dark chocolates, we were feeling as though the day couldn’t get any better.

I am very pleased to say that we were both very, very wrong.  Our tour guide, Rebecca, picked up her cell phone and after a brief conversation  told us that we were in for a special lunch but we needed to leave right away as the restaurant was staying open late just for us.

When we walked into the red and white striped building I was awestruck.  There was a table laid out with various crostini, a mound of “Chianti Butter,” which is herb infused lard, and a display case with the most beautiful cuts of meat I have ever seen in my life.

Behind the counter was a man who seemed larger than life.  He picked up six small wine glasses in one enormous hand and with the other he poured us each a glass of his house Chianti.  At the time I didn’t speak any Italian, short of a few choice words that I would never use in front of my grandparents, but Rebecca explained that as he handed out the wine he was quoting cantos from Dante’s Inferno in Old Italian.  Our group listened intently and quickly put down the eighth glass of wine of the day.

We finished another round of his Chianti as he passed out samples of crostini to our group.  He explained, through our tour guide, what everything was but to me it was a blur of tastes and aromas that I will spend a lifetime trying to fully comprehend.  As he poured another glass of wine for everyone in the group he proclaimed, in Italian, “All an animal needs is a good life, a good death and a good butcher, time to eat!”

He turned quickly on his heel and walked towards the back wall of his butcher shop.  With about one step left before he smashed face first into the wall I started to wonder if maybe this man had had as much wine as me that day, but as that thought breezed through my mind the pristine white tile wall slid open to reveal a narrow staircase.  Confused, we all followed him up the stairs which opened into a dining room over the butcher shop with three large tables.

Our meal started with carrots, red onion, fennel and celery.  Dario’s assistant Dante popped up at the tableside in a pair of welder’s glasses and proceeded to throw seasoned salt into a small container in front of each of us with a spoon.  He then walked around to each seat and poured a mixture of red wine vinegar and olive oil over our piles of salt.

The wine may have tainted my memory but I am sure I have never had something as simple as vegetables taste so good.  The menu at Dario has two options, The Dario+ and The Welcome, and my wife decided we should get one of each and split them. 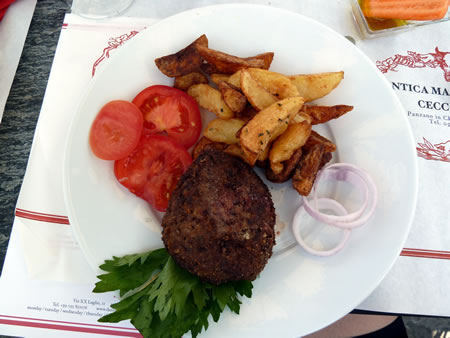 The Dario+ is “the way a burger should be”; no bun, just a little bit of seasoned bread crumb on the outside.  It’s crisp and crunchy on the outside and warm and very, very pink in the middle.  This dish is served with potatoes roasted with garlic and sage and Dario’s homemade sauces, which include house ketchup and honey mustard.

The Welcome is a mixed platter consisting of: Chianti Sushi (steak tartar), Chianti Tuna (pork preserved in oil), pork roasted with herbs and garlic, and meatloaf with sweet bell pepper sauce.  I can tell you right now it is impossible to pick a favorite part of the dish.

A Return Visit to Dario’s For Lunch

When I finalized my plans to complete my externship in Italy and I knew that my wife was going to visit, we decided we needed to make plans to return to Dario+ for lunch.  We got up early and took two buses to make it to Panzano in time for lunch.

When we arrived in the center of Panzano we had no idea where the restaurant was and we spent about an hour walking around town before we caught sight of the landscape painted cow.  The buffet of crostini was lined up on the table, the display case was even more beautiful than I remembered and familiar aromas filled my head as I walked, knowingly this time, towards the back wall. 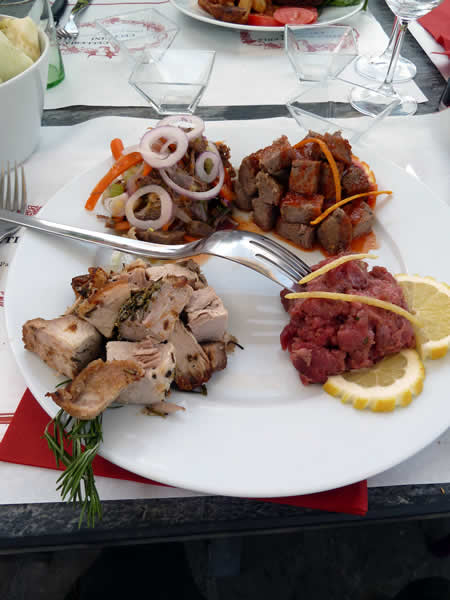 We walked up the stairs and took a seat on the patio.  Dante came by and threw salt in my little dish and then poured the perfect ratio of vinegar and oil as I looked down at the menu.  My heart skipped a beat when I saw that there were still only two options, The Dario+ and The Welcome.  Why mess with perfection?  Without saying a word my wife and I knew that I would order one and she would order the other and that we would clean both plates between the two of us.

At the end of the meal I decided I needed to walk around a little bit to digest.  The patio at Dario+ overlooks a garden of rosemary bushes with crushed stone paths winding around a parking lot.  As I strolled the paths from one end to the other I breathed in the perfume of the rosemary bushes and looked out towards the rolling hills of Chianti with a full stomach and a happy heart.

When I reached the end of the path I looked down a flight of stairs and saw the bus stop that we had been dropped off at hours earlier.  When we arrived we had been about 50 feet from the kitchen.  I should have just closed my eyes and trusted my nose, but then again some things in life are worth waiting for.  Besides, I might not have been able to eat the whole meal if we hadn’t taken our little stroll.