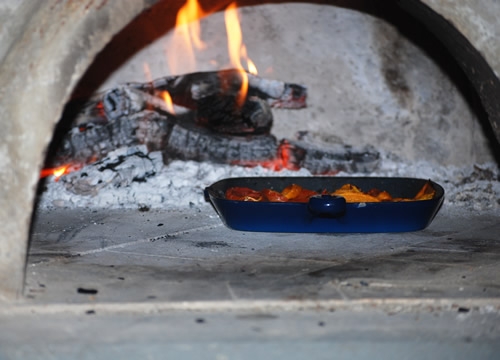 We Love Our Wood Burning Oven

My wife always wanted an outdoors pizza oven so this summer we had a wood burning oven built as part of our patio. I was a little “reluctant” because I thought, “How many pizzas does she think we will be eating?”

I have since learned there is a lot more to a wood burning oven than just pizza. You can bake bread, roast meat and chicken (I may try to roast our turkey this Thanksgiving), braise, just about anything you can do in a conventional oven.

We purchased our oven from Wildwood Ovens and I just posted an interview I did with Michael Gerard, the Chef/Owner who has been teaching me how to cook in my oven. The first time I tried making pizza was a disaster. My wood was wet and I couldn’t get it hot enough. The next experience went much better. My pizza still needs work, but I braised some short ribs overnight that were incredible.

If you want to learn about the advantages of cooking in a wood-burning oven and read some of Michael’s tips on how to do it right, check out my Novice2Pro Interview with Michael Gerard.

What Makes Cooking In A Wood Burning Oven Better?

According to Michael, making pizza in a wood burning oven is better because, “The higher temperatures afforded by our ovens (700º F), cause rapid rise spring to the dough, this produces a crust that has dimension and structure, crispy on the edges and bottom and tender and forgiving on the inside. Bubbles and air pockets run through our crust, many describe as light as air.

According to Alton Brown in his great reading cookbook and a must for home cooks, I’m Just Here For The Food, he thinks the advantage to roasting anything in a earthen oven is even heat distribution. He says with traditional metal ovens, “it’s almost impossible to get all this heat into the food evenly. Some ovens are better at it than others, but I’ve never seen a metal oven that roasts as well as a pile of dirt (be it in the form of clay, ceramic tile, or what have you).”

He goes on to describe how a metal oven cannot generate heat beyond 500º F or retain heat; only reflect it off its walls. A clay or earthen oven can be heated up to 700 degrees and will radiate the heat evenly over time thus roasting foods that taste better.

Chef Brown even shows you how you can build your own miniature makeshift clay oven in your kitchen oven using firebricks. You get the bricks really hot by using the self-clean setting, then turn off the oven and roast your food. He does mention he has not found a single manufacturer condoning this technique but if interested, you should check out I’m Just Here For The Food.

I have not roasted anything in my oven yet but you can be sure when I do I will be letting you know if I can taste the difference. I did braise short ribs with some onion, fennel, tomatoes and brown stock that was incredible.

After making some pizza at 700º F, I let the oven cool down to around 500º F and put in my Le Creuset enameled cast iron oval French pot filled with short ribs I prepared in the house, covered the front opening of the oven and let them cook all night with just the heat held by the oven.

When I woke up the next morning, the short ribs were tender and after removing most of the fat rendered from the meat, I had a wonderful, flavorful sauce. I can’t wait to try some other braises. I will post some recipes once I get a little better at this style of cooking.

My Le Creuset 6¾ quart enamel pot has a handle on the cover made of heat resistant plastic that Le Creuset says should not be used in oven temps higher than 450º F so I removed the handle from the cover and used a layer of aluminum foil under the cover to help seal it. It seemed to work just fine.

« What To Do With Leftover Chicken Carcass
Mashed Potatoes Cooking Cartoon »