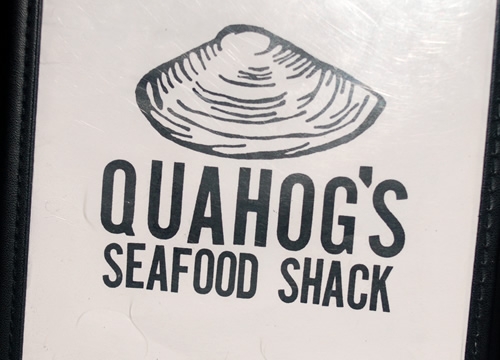 Last week wrote about one of my favorite restaurants in Stone Harbor, NJ called Jay’s on Third but I also mentioned Quahog’s Seafood Shack as another of my favorite dining establishments down at the Jersey shore.

Back in 2008 I wrote about their signature dish, Grilled Barbecue Pacu Fish Ribs that were featured on the TV show “Diners, Drive-ins and Dives” with Guy Fieri.

We did make it there last week, and it is never a let down. In fact, my wife said to me after dinner “I am never disappointed with the food we are served.” And now that the girls have finally stopped ordering off the kid’s menu, I get to sample even more menu items.

Where Jay’s is a more formal looking establishment as far as a seaside resorts go, Quahog’s Seafood Shack is just what you would expect of a beach resort casual seafood restaurant. They have a few tables inside in the air conditioning, but most of the tables are outside under a roof but open to the environment and that’s where you want to be.

When it’s hot and humid like it can be in July, you want to be situated under one of the many ceiling fans.

The walls are adorned with fishing bric-a-brac and blackboards describing the daily specials. Each table has a collection of hot sauces next to the salt and pepper shakers. The waiters are friendly and attentive as can be, but when it is busy, so are they.

Quahog’s is a BYOB restaurant, and this is where I came across my first wine bottle with a glass cork. We brought along a bottle of Calera Chardonnay from Fred’s, the local liquor store in Avalon.

We were all surprised when the waiter popped it off with a twist of the hand and placed a weird looking glass stopper on the table. I’ll be writing more about this alternative wine cork in the near future. 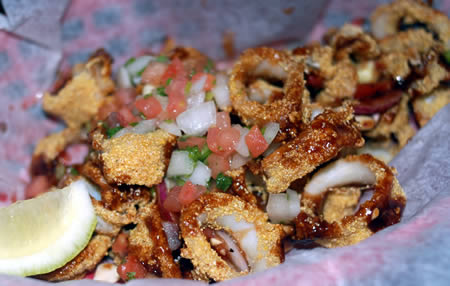 We started with a few appetizers including the cornmeal encrusted local crispy calamari with chipotle bbq sauce & tomato-jalapeno salsa. They stuck it in front of my daughter Nell so I risked life and limb to sample some.

I am happy to report that I emerged both satisfied and unscathed. There was also a special appetizer of watermelon and tuna ceviche that was quite tasty.

My youngest wanted to order everything on the menu. Obviously, she takes after me. She was so excited about coming back to Quahog’s, and I would bet it’s because of their lobster taquitos with mango salsa.

They serve this as an appetizer but she ordered it as her main meal.

According to Wikipedia, “taquitos” are small tacos that were actually invented in San Diego, CA by Ralph Pesqueria, Jr., although I find it hard to believe that someone didn’t prepare these in Mexico years ago.

For entrees my wife ordered a whole branzino, the fish of the day, and we were all very surprised by how it looked when it was served. My wife said it looked like “a boat, with the head as the bow and the tail as the stern”. I only wish I took a better photo. It was delicious.

Nell had been craving Italian food. She wanted to go to another restaurant in Stone Harbor that featured Italian food when she heard the wait to get into Quahog’s was over an hour. (They don’t take reservations.)

So she ordered the clam carbonara with fresh linguini, little neck clams, bacon, roasted garlic, sun dried tomatoes and a white wine cream sauce. She was in heaven.

I ordered their famous BBQ Pacu Fish Ribs. They were served with an orange bbq sauce over coconut rice. You can read more about these ribs on my 2008 blog post called Grilled Barbecue Pacu Fish Ribs. 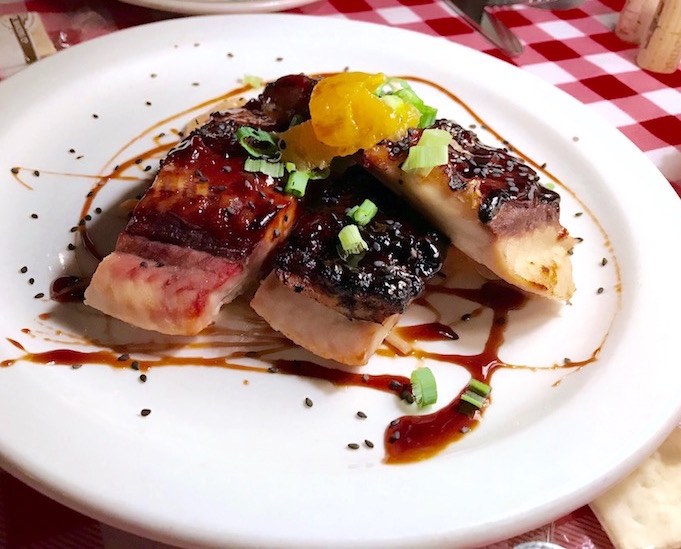 By that time, it was getting late, and we were too full to order dessert, so we left very satisfied and look forward to coming back next year.