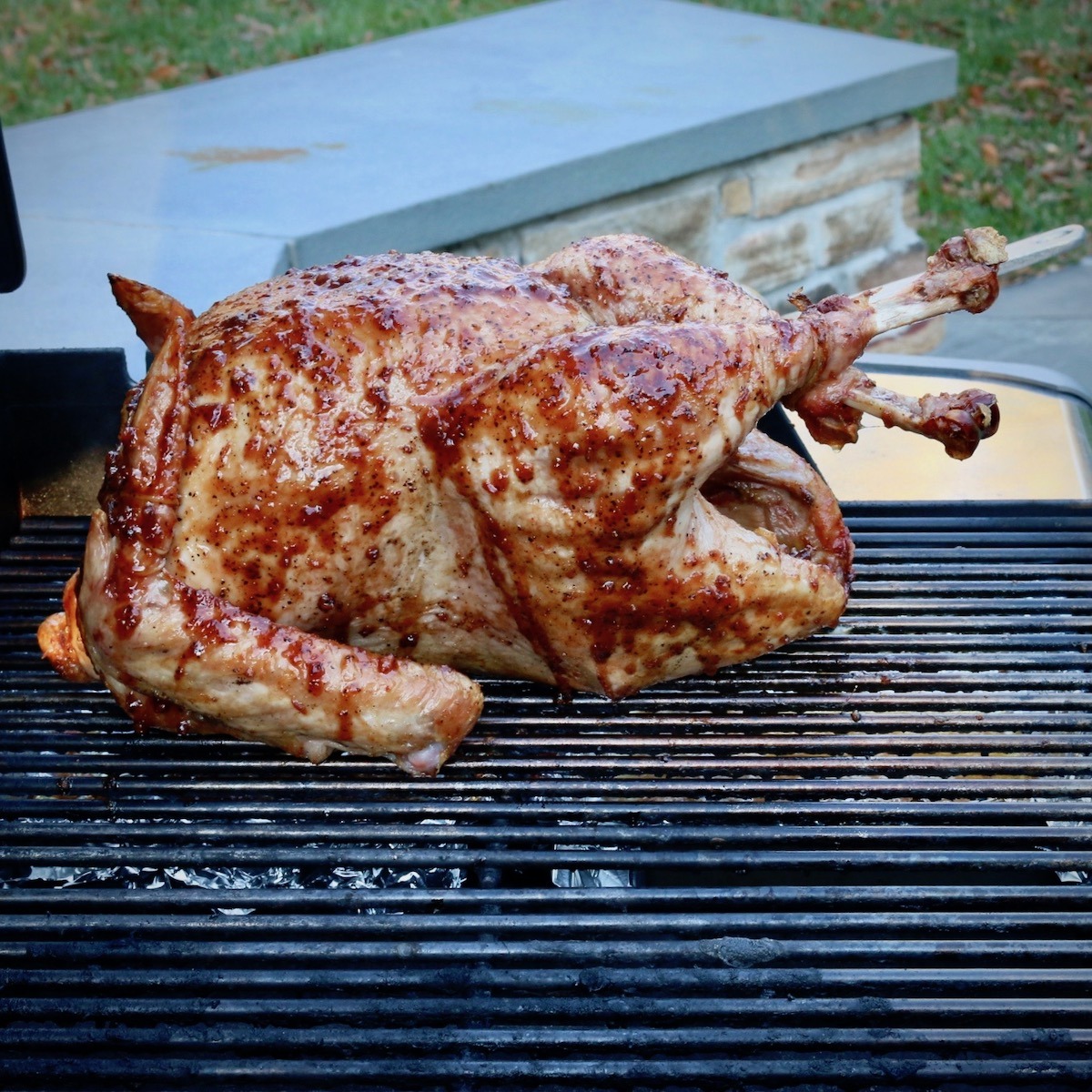 Something Different – Grilling Your Turkey

I wanted to share with you a novel way we cooked our turkey one year while we were still living in Park City, Utah. We grilled it on the barbecue.

Now I’m sure many of you are saying to yourselves, “RG, get real. We’ve been grilling our bird for years. Get with the times.”

But this home cook has been doing his bird in the oven for as long as he has been cooking turkey and gotten along very well thank you. So I’m reading this article in Cuisine, one of my favorite cooking magazines, that described the in and outs of grilling a turkey, and I asked my wife if she wanted to give it a try.

She agreed and we fired up the grill. That is, I turned on the gas. In fact, I don’t think I would attempt this without a gas grill because a 12-pound bird takes 2.4 hours to cook. I don’t know how you would keep the coals hot for all that time.

Besides not being dried out and having a wonderful hint of smoke flavor, the biggest advantage of grilling a turkey is it frees up your oven for all those other side dishes so important at every Thanksgiving meal.

You know how it is when you are trying to heat up your Scalloped Oysters and bake your acorn squash, and keep that pumpkin pie warm while at the same time juggling that basted butterball.

With all that extra room you will have in your oven, you can come up with a few more side dishes to amaze your family and friends. No one is leaving your table early this year.

Whether you are grilling or roasting a turkey, the trick is to cook the dark meat to a minimum of 170 degrees F without drying out the breast meat. Easier said than done.

Traditionally when cooking a bird in the oven, I use all sorts of tricks to prevent this from happening including basting, covering the breast with tin foil, or putting a layer of fat on top of the breast (bard).

Tips For Grilling a Turkey

Easy enough but be careful. That gobbler gets hot.

Thawing Tip – Allow 6 hours for every pound of frozen turkey. A 12-pound turkey will take 72 hours, that’s 3 days. Another safety tip is to defrost your turkey or any frozen fowl in your refrigerator.

Trimming Tip – I’ve heard this in some other cookbooks and it makes sense. Cut out the wishbone for easier carving. I do this whenever I roast a chicken too.

Seasoning – This is the fun part. After you rinse the bird in cold water and pat it dry, you will want to season it. I like to slide a couple of fingers under the skin near the breast area and loosen it up until I can fit my whole hand under the skin. I work it around slowly and carefully until I have most of the beast skin loosened and then season it with your favorite family rub recipe. Don’t forget to season the turkey cavity as well. No stuffing please. Make it in your lonely oven.

Trussing (or tying up the bird with butcher’s string) Tip – One reason we truss chickens and turkeys is to make them look better when served and easier to carve at the table. Who wants to bring a turkey to the table that looks like it is trying to fly away?

I would still use a shallow roasting pan to catch the drippings. Check your grill to figure out what size you will need before you start or you will end up running to the supermarket that is most likely closed for the holiday. I’ve been there.

You will also need an instant thermometer to check the temperature of the bird since I’m hoping you are not depending on the pop up that comes with some turkeys. If you do decide to depend on the pop up, the bird will be so dry you better be sure to have lots of gravy.

And if your grill does not come with a build in thermometer, you will need to purchase a cheap oven thermometer to keep track of the grill temperature.

The way this works is by using indirect heat. That is, you only turn on one side of the grill and place the turkey on the other side.

By doing this, you are effectively slow-roasting the bird. You will be cooking the bird with the lid closed just like you keep your oven door closed when you roast a turkey in the house so it will be important to monitor the heat.

You will control the temperature by opening and closing the grill lid. If the interior temperature seems to be getting a little too hot, open the lid for a few seconds to cool it off.

I remember cooking our turkey on a crisp, cold day, running back and forth from the football game on television to the grill outside all the time thinking this is not going to work out but it did and we were thrilled with the results.

As I mentioned above, there is a lot of flipping and flopping and turning that goes on with this technique so be prepared with some oven mitts or gloves or something so you don’t burn your hands. The formula for determining when to rotate your turkey is thus:

Take the weight of the turkey and multiply it times 12 minutes per pound and divide by 3. Therefore a 12-pound turkey would calculate as follows: 12 lbs x 12 min./lb = 144 minutes divided by 3 = 48 minutes per rotation. well not really, but read on.

Start out by preheating your grill to 350° F.

Stage One – On the side of the grill that is not on (not hot), place the turkey on its side so the wings and thighs are touching the grill and the legs are pointing to the back of the grill.

Close cover. Allow cooking for 48 minutes but being sure to monitor the grill temperature so it doesn’t get too hot or too cool. 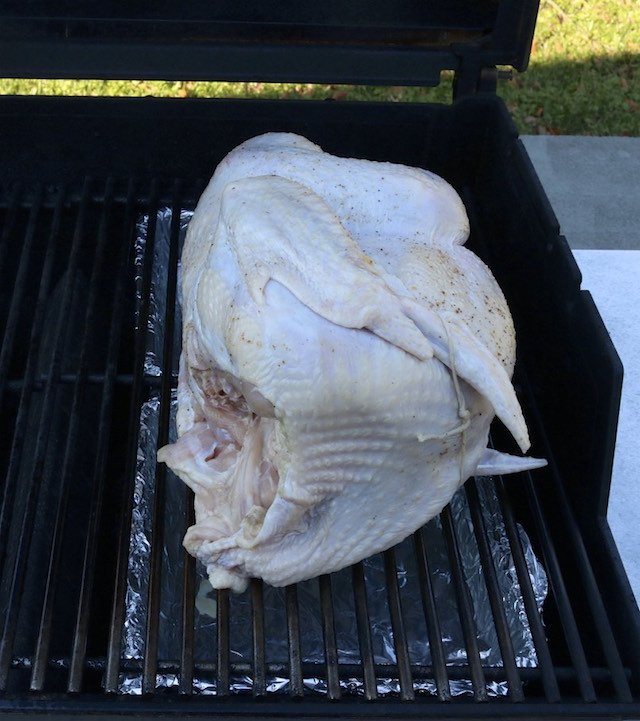 Stage Two – When this is done, flip the bird over so the other wings and thighs are down and touching the grill with the legs now pointing to the front of the grill.

Close grill cover and allow the turkey to cook for another 48 minutes while you are either watching the game or preparing one of your many many side dishes. Again, be careful to monitor the temperature. 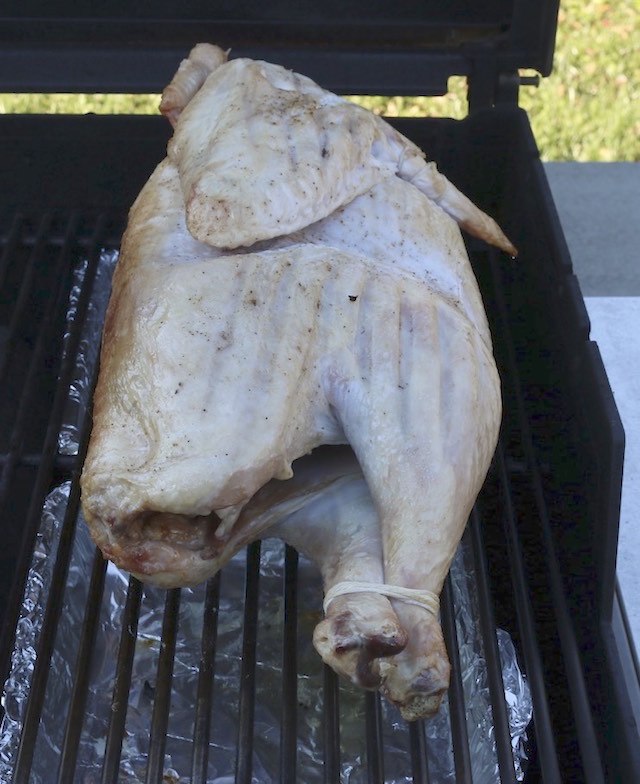 Stage Three – Flip the bird so it’s on its back with the breast facing up and the legs facing the back of the grill. Close cover.

In this position you will cook the bird for half the amount of time or 24 minutes and start your basting. I was so worried about keeping the grill at a constant 350° F and it turned out it just worked itself out perfectly. 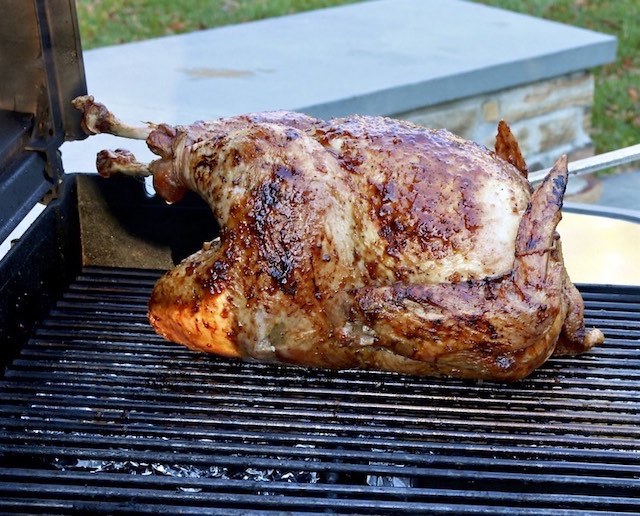 Stage Four – Rotate the bird so its legs are facing the front of the grill and cook for approximately 24 more minutes. Baste and close cover.

I say approximately because we want to start checking the bird with our instant thermometers and continue grilling until the breast meat reaches 165° F. 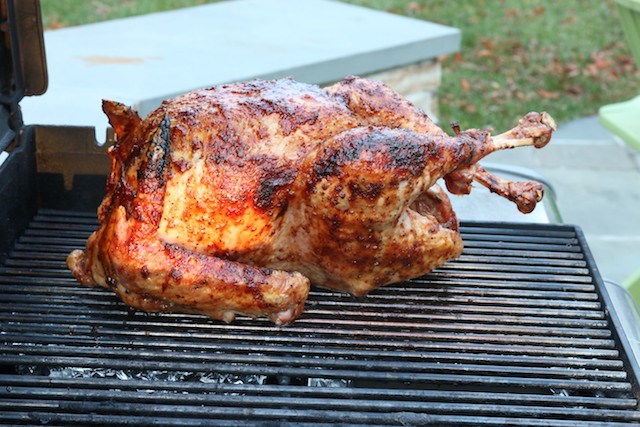 Adding Color To The Bird

To give the bird an incredible color, the recipe in Cuisine suggests you coat the bird with a cranberry glaze during Stage 4 but I started basting in Stage 3 and everything turned out fine.

They warned me keep a close eye on it as to not darken (burn) the skin with the sugars from the glaze.

I’m not sure if it was the wine or an exciting football game, but the overall appearance was a little darker than I would have liked so be careful.