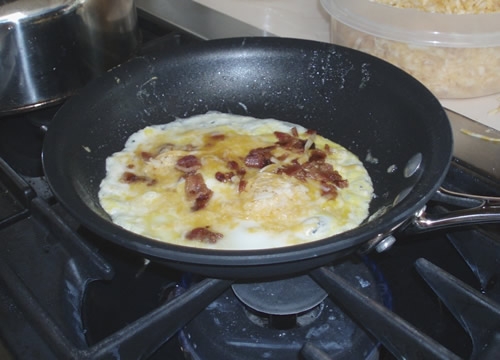 So You Want to Make the Perfect Omelet

This morning I decided on a two egg omelet and completely messed it up. I have made hundreds of omelets in my life and most of them have been fine but this morning it was a mess.

I thought I did everything the same way I always make them but obviously something was off. I think it was the salsa I tried adding to the interior of the omelet instead of adding it as a topping.

It made the mixture too liquidy. Tasted good but was a mess. Wish I took a photo of it.

Many Ways To Prepare An Omelet

I have my way of making omelets but I have seen them done in many ways. I whisk the eggs with a little milk, transfer them to a hot pan with a little melted butter and let them set before adding additional ingredients like cheese, ham, vegetables.

I have also seen professional chefs at brunch buffets start with the additional ingredients in the pan and then add the egg to that. Some fold the omelet in half and others flip them. So I guess what I’m saying is there are many ways you prepare your omelets. I

Instead of me trying to describe each method, I think it would be easier to show you with some of the great omelet making chefs out there on the Internet. As soon as I get my video act together, I’ll try to shoot some video of me making an omelet but for now, here are some of the best examples I could find.

Let’s start with one of the best chefs out there. In this video, Chef Pepin describes two methods of preparing an omelet, an American version and a French version. This may be the only video you need to look at but I’ll find some more.

I thought it was interesting that Chef Oliver does not use any milk or cream in his egg mixture.

Chef McCormick is an adjunct instructor of culinary arts and hospitality management, Community College of Philadelphia and demonstrates how to prepare and cook a classic French omelet. This is detailed and may be more than you want, but it includes a ton of great information.

How to Make a Ham & Cheese Omelet

This is a great example of how I’ve seen omelets prepared at bunch buffets by professional chefs. It’s not how I do it but I’m going to experiment with some of the ideas.