For Father’s Day, I asked my friend Angelina, a young college student going to school in the Philadelphia area if she would like to write a post about her dad who just learned this week he was cancer free after a fight with the disease.

To my delight, Angelina shared a story about lessons learned from her dad including how to prepare his mom’s homemade gnocchi. We even have a photo of the actual recipe in her grandmother’s handwriting.

An Ode to My Dad on Father’s Day 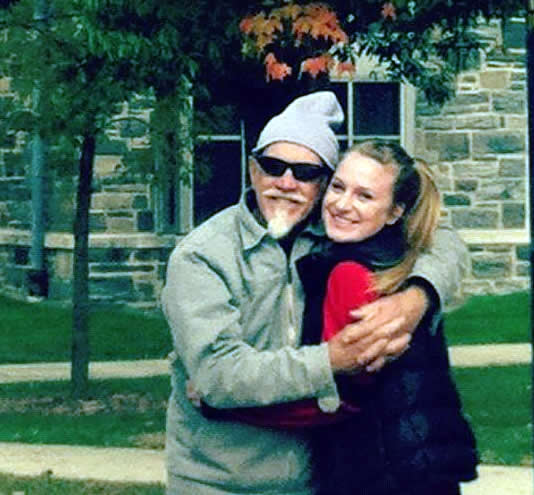 Growing up, there was a saying my dad constantly repeated to me that he acquired from his own father. If I ever complained to him about something trivial, he would begin by responding: “Ang, I’ll tell you one thing…”

At which point I would lean in eagerly, hoping to catch a pearl of his wisdom—only to be disappointed when he said: “I can’t tell ya everything!”

He may not have all the answers, but my father has bestowed me with plenty of great lessons over the years. For instance, he taught me how to curse vehemently in Italian at a bad driver, why you should never bunt a runner over to third in the game of baseball, and, inadvertently, a lot about what to do in the kitchen.

Let me first say I am the most “reluctant” cook you can find. I grew up having the luxury of my parents putting meals on the table every night for my brother and I.

Although my mother and father urged me time and time again to help prepare dinner, I avoided the kitchen like it was the plague. I never had much interest in cooking, and I was always afraid I would produce something utterly inedible.

Until I ventured out on my own into the real world, I don’t think I realized how many cooking tips I absorbed from my father over the years. I may not have been actively helping out, but I sure was watching and listening to him in the kitchen.

My dad grew up in an Italian-American household, and his family abided by the saying, “Mangia E Statti Zitto” which translates to “Shut up and eat!”

Since moving out of my childhood home, I’ve learned about three important things. First, it’s always necessary to splurge on the really good olive oil and parmesan cheese. Next, playing Louis Prima’s music makes for a considerably better kitchen experience.

And finally, it’s perfectly acceptable to have pasta three— or even four—times a week.

My dad is a darn good cook and a lot of what he does in the kitchen today is influenced by his late mother, Mary Matarozzi, who would make delicious Italian meals for her son and husband. Grandma Matarozzi was famous in South Jersey for two things: her work ethic and her handmade gnocchi.

As a kid, I can remember my dad making her gnocchi for us many times and it’s one of the best dishes that he prepares  in memory of his mother.

Gnocchi are a type of dumpling pasta, made of semolina flour, egg, cheese, and potato. Gnocchi are generally eaten as a primi piatto (first course) and vary in shape and size.

Sometimes my family eats gnocchi as a small side dish when my mother feels like the meal is otherwise a bit too carb-heavy.

Gnocchi is best when it’s homemade, but can be bought packaged from a grocery store as well. If you go to a specialty Italian supermarket, you may even be able to purchase the gnocchi fresh. There are also smaller forms available called gnocchetti (which literally means “little gnocchi”).

Gnocchi dates all the way back to the expansion of the Roman Empire, when the pasta was made out of porridge-like dough and eggs.  The use of potato in gnocchi is a relatively recent development, as different countries and regions made their own variations to the ancient pasta dumplings.

The etymology of gnocchi derives from the Italian word nocchio, meaning “knot in the wood” (makes sense when you think about the fictional character Pinocchio, who was carved out of wood in a small Italian village). 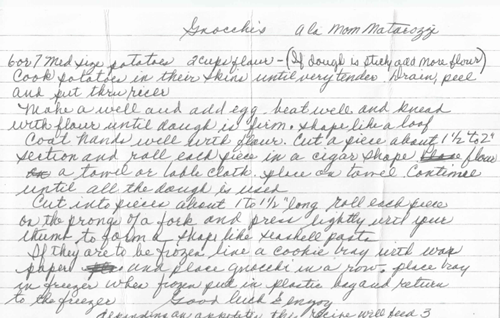 You can see the actual picture of my grandmother’s handwritten recipe for the gnocchi dumplings below. It’s pretty cool that we still have this around the house and we can refer to it out of habit.

You can add a variety of sauces to gnocchi, both tomato and cream based.  A lot of people love pesto sauce with their gnocchi.

My brother’s favorite is a nice, hearty Bolognese sauce, but since my mother is a vegetarian, my dad will generally make both a vegetarian and meat option. He also makes a great Puttanesca sauce which we sometimes pair with the dish.

This is a particularly happy Father’s Day for my family because we are celebrating my dad and his recent clean bill of health—he is now cancer free after completing six grueling chemotherapy treatments.

My family will be traveling back to the Motherland at the end of this month in celebration. I’m pretty sure after a 10 day vacation to Tuscany I’ll never want to hear the word ‘pasta’ again.

So dad, it may not seem like it, but I actually have been listening to you over the past twenty years and I’ve learned a thing or two. Every decision I make is intended to reflect what you have taught me.

I wanted to thank you and wish you a healthy and happy Father’s Day—the next bowl of gnocchi is on me. Ti Voglio Bene.

How to Make Gnocchi Matarozzi Style