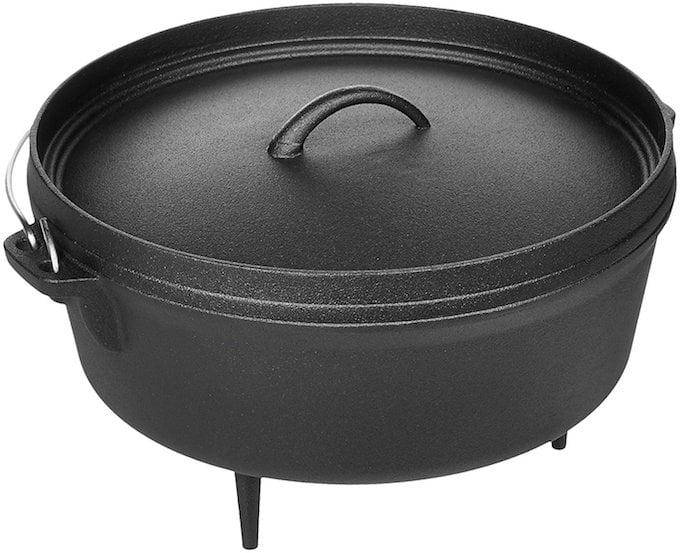 The Difference Between a Dutch Oven & a Camp Dutch Oven

A couple of weekends ago, we were in central Pennsylvania for the annual Apple Butter day at our friend, LaRue’s home. We stand around all day stirring a giant copper pot filled with fresh apple cider and bushels and bushels of peeled, cored and chopped local apples.

After 10 hours of cooking down, you end up with a thick, smokey, delicious apple butter. Everyone brings various sized canning jars with self sealing lids and we all go home with enough apple butter for the year.

There’s also a lot of food prepared and brought to the event by friends and neighbors, much of it in crock pots. Our friend LaRue, a real outdoors-man  who knows a lot about camping, canoeing, sharpening knives, wilderness survival – do I need to go on – was making Monkey Bread using the hot wood coals from the fire to heat up what he calls a real “Dutch Oven”. 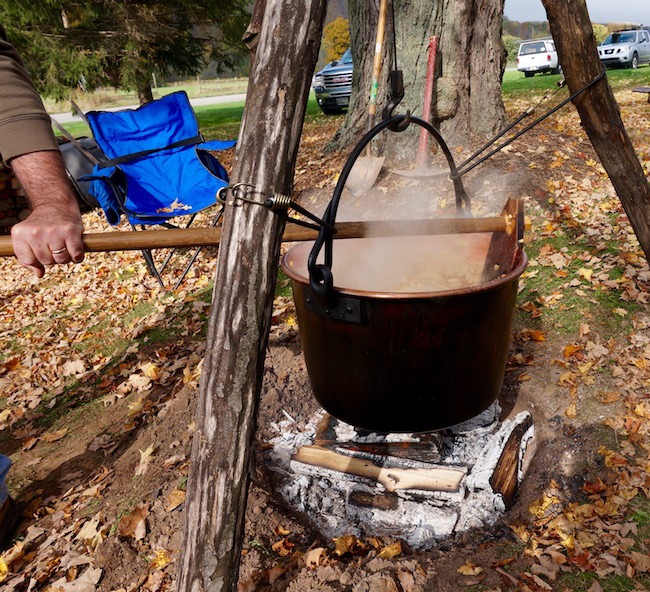 OK, that got my attention so I asked him “what’s a real Dutch Oven?”

He said, “A real Dutch Oven should have a flat lid with a lip around it to hold hot coals from the fire, a flat bottom and three legs to elevate the pot from coals underneath.”

With this style of Dutch Oven, the main heat source comes from the top of the pot rather than the bottom and is better for baking breads.

The more familiar Dutch Oven has a rounded top, flat bottom and no legs so the pot sits right on the coals. This is a great pot when making stews, braises and chili. 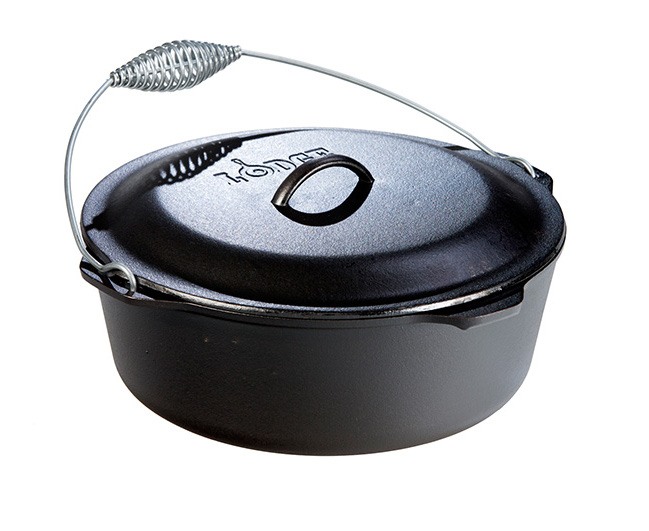 What Does Lodge Manufacturing Company Call Them?

Lodge is the largest manufacturer of Dutch Ovens and their website is filled with incredibly useful information about cast iron pots like how to season and take care of them.

I visited their website to see what they call these two styles of Dutch Ovens and they call the one without legs a Dutch Oven and those with a flat lid and legs a Camp Dutch Oven.  I’ll have to get back to LaRue and see if he mixed up the names.

Today, the CEO and the Chairman of the Board are great-grandsons of founder Joseph Lodge. They have been able to keep the business in the family and continue to grow their product line and improve manufacturing methods.

Where the name “Dutch Oven” comes from is not really known. There are numerous theories including:

An Englishman by the name of Abraham Darby learned about the casting process while visiting Holland in 1704 and then went back to England to create his own casting process. He used this process to manufacture pots that may have been some of the first “Dutch Ovens” using the process he learned in Holland.

Some say the name started with the Pennsylvania Dutch settlers who cooked with cast iron pots that were later called Dutch Ovens.

And then some think the name comes from early Dutch traders who sold these kind of cast iron pots and were later called Dutch Ovens.

In other English speaking countries other than the United States, these cast iron pots are called Casserole Dishes. The word casserole is French for pot.

The French company, Le Creuset, started making their own version of Dutch ovens back in the early 1920’s but used a “non-porous interior enamel allowing for easy cleaning and eliminating the need to season the cast iron”.

I have a couple different sized Le Creusets and love them for their design and beauty.  They are perfect for many of my stews and braises and look great on the table when serving. 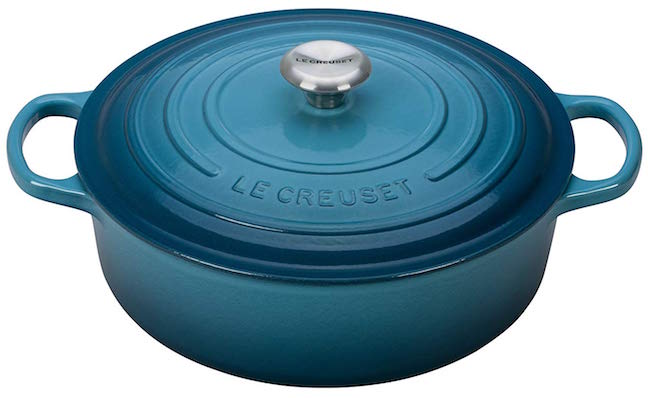 Did you know Dutch Ovens not only were essential for cooking purposes, but they were also valued enough to be part of owners wills back in the colonial period. George Washington’s mom left her collection of “iron kitchen furniture” to her grandson and granddaughters?

The French Le Creuset Dutch oven with its enameled interior coating does not have to be seasoned and is easier to clean with soap and water, something you do not want to do with all cast iron ovens.

The enameled coated Le Creuset is not as resistant to high heat as all cast iron so they are not as suitable for sticking in a fire while camping. You also have to be careful to cover the lid handle with aluminum foil when using in a high temperature oven so it doesn’t melt.  At least, that’s what I do.

Dutch Ovens are back. There was a period of time after the First World War when Dutch Ovens were considered “old fashioned” and were out of favor. Then, in the 1970’s and 1980’s they became popular again and haven’t lost much ground even with all the new digital cookware now available.

Did you know that the Dutch Oven is the official state cooking pot of Arkansas, Texas and Utah?

Other Names For Dutch Oven

We call these cast iron pots Dutch Ovens but in other parts of the world they are called something different. For example, in Japan it’s called a tetsunabe. In the Balkans, a sač. In Eastern Europe and Central Asia, it’s called a chugun.

In South Africa, the Afikaans call it a potjie. In Australia, its a bedourie. And in its native Netherlands, it’s know as a braadpan.

How to Choose A Dutch Oven That’s Right For You?

Check out my post – Dutch Ovens – How to Choose One That’s Right For You to learn more about buying a Dutch Oven to fit your needs. 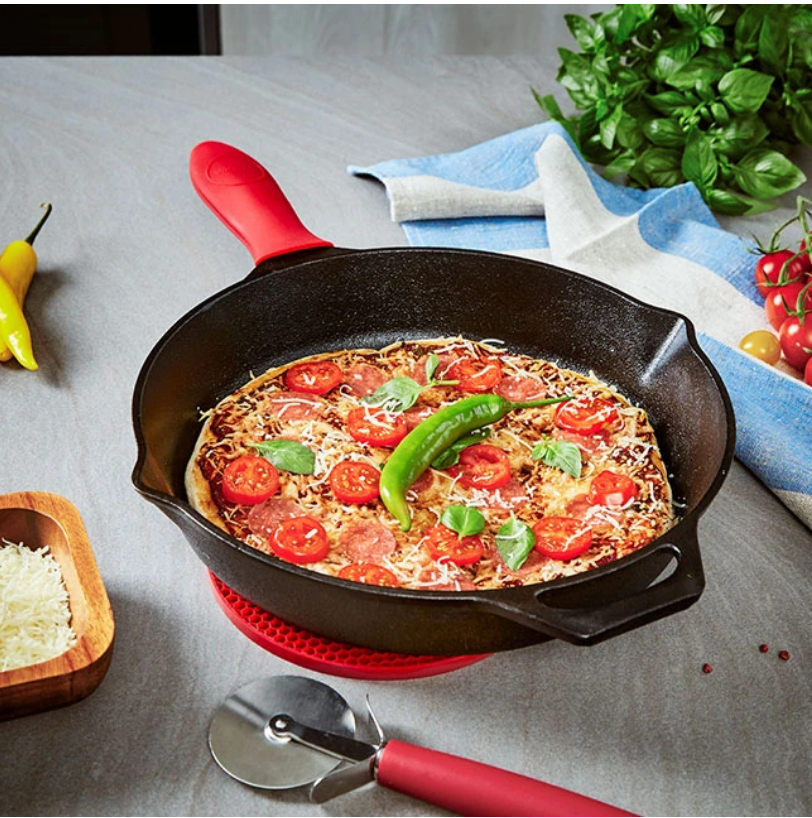 Recently I was contacted by John Spencer from Uno Casa. They make a variety of cast iron and enameled cast iron pans including Double Dutch ovens, fry pans, skillets and woks. These products are built to last so you'll have them around for a while, a long while. Tough and durable, cast iron cookware is praised for its versatility, even cooking, and simple maintenance.
We do a lot of cast iron cooking in our house especially in our outdoor wood burning oven so I can't wait to give them one a try and report back. In full disclosure, John is sending me one of their woks to play around with and they are an affiliate partner which means if you purchase one from my site, I get a small commission that helps me keep my site up and running so I appreciate your support.