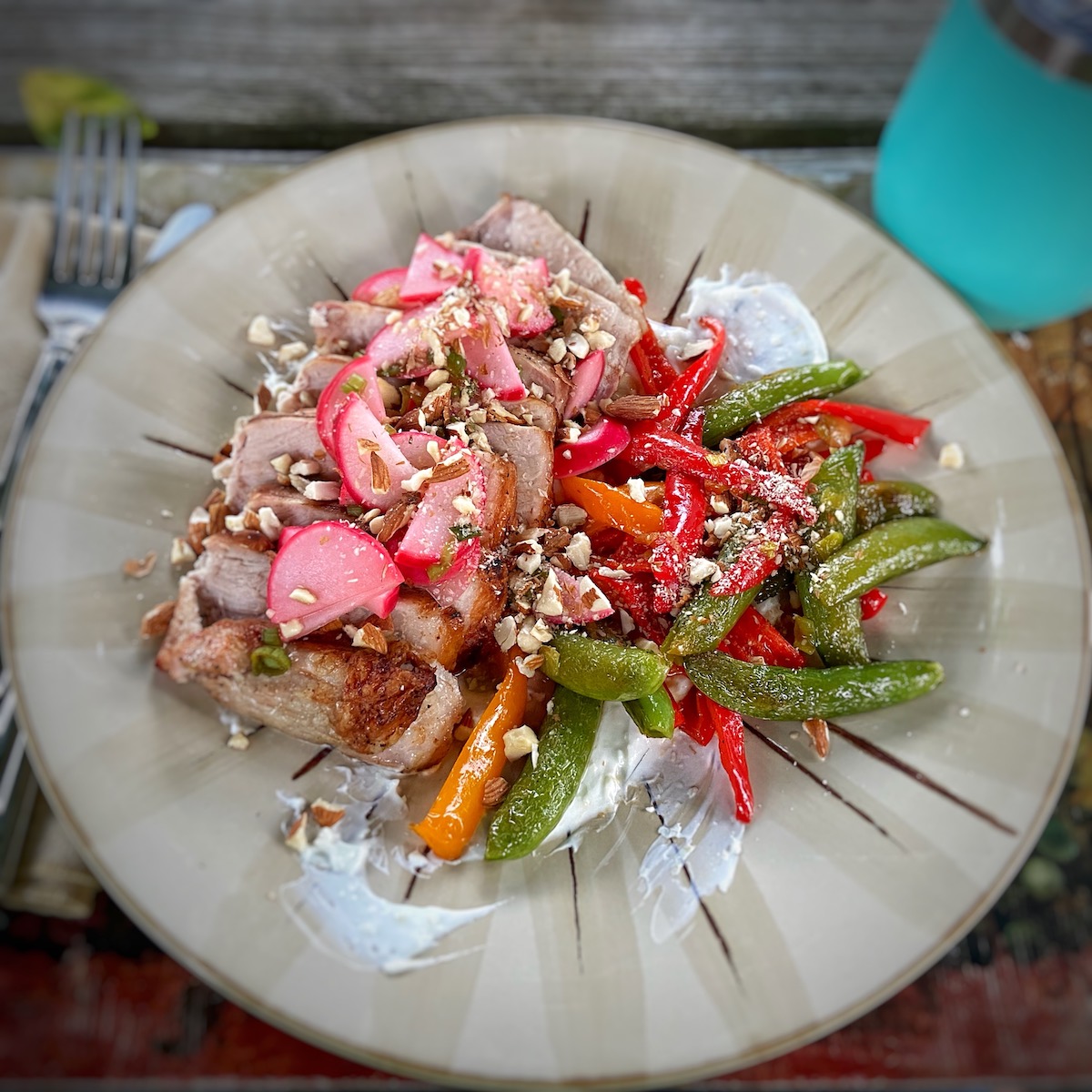 This is a story about grilled pork loin chops. When our youngest daughter was born 10 weeks early, we invested in a deep freezer for storing breast milk.  Over time, the inventory of breast milk diminished and the supply of who-knows-what took over.

Between trips to Costco and our Foodsaver that vacuum-seals anything and everything, sometimes our freezer becomes a bit of a mess.  So when we first started quarantining, my once little preemie, now 20, and I teamed up to create an inventory of what was in the freezer for our meal planning.

I was surprised at how many pork loin chops we were storing in our freezer, since we are not big pork eaters (the exception being bacon).  When I was a kid, one of my Mom’s go-to dinners was a casserole consisting of the thinnest, driest pork chops topped with sliced onion and tomato and covered in rice.

It was the ‘sixties after all.  Memorable, but not in a “this is my favorite meal ever” way.  So when I think of pork chops, that’s my flashback and I have to snap out of it to carry on.

What to Do With These Pork Chops?

Having gotten past that hurdle, my next challenge was figuring out how to prepare pork chops that appeal when it’s 85 degrees outside with 100% humidity.  My first inclination is always apples and sweet potatoes and that just wasn’t a combo I could rally around on a hot day in June.

So I started leafing through seasonally appropriate recipes in Paleo Magazine and Blue Apron, keeping in mind what I had on hand.  One of the things I like about these two sources for recipe ideas is that they have mastered the art of combining ingredients artfully – NOT the stacked casserole of old but a blend of flavors and textures that come together beautifully in the plating.

Here’s what we came up with:  grilled pork loin chops on a bed of yogurt accompanied by sautéed seasonal vegetables and topped with pickled radishes.

The Reluctant Gourmet has been playing around with pickling various vegetables so we have ingredients like radishes, Persian cucumbers, and green onions in the vegetable drawer for that purpose.  The first thing I did was slice up some radishes and the green part of a couple green onions and marinate them in vinegar.

I used white wine vinegar but you could substitute whatever you have on hand, such as sherry vinegar, apple cider vinegar, rice wine vinegar, champagne vinegar…..you get the idea.  You just put your sliced veggies in a bowl, add some salt and pepper and a few tablespoons of vinegar, stir and set aside.

When we were ready to cook, we seasoned the loin chops with my very favorite spice blend,  Morton’s Nature’s Seasons seasoning blend.  It has everything:  salt, pepper, garlic, onion, celery seed, parsley, and some mystery spices just to keep it proprietary.

My love of this blend has provided a bottomless source of humor for my family, who mock me every time I reach for it.  Their loss.

Actually, their gain – they consume it all the time and seem to be pretty happy with the results.  Once the chops approached room temperature, the Reluctant Gourmet took them out the grill while Maddie and I prepped the sides.

Side Dish of Snow Peas and Bell Peppers

We had bell peppers and snap peas in the refrigerator that were ready for prime time, so we used those for our saute.   Since it was just the three of us, we used half each of a red pepper and an orange pepper, washed, seeded, and sliced lengthwise into strips.

We used about a cup of snap peas, washed and with the cord that runs along the seam removed.  The snap peas went in first, to cook in a heated pan with olive oil for about 3 minutes.

Then we added the peppers and also tossed in the white bottoms of the green onions left over from the pickling mentioned above, also sliced.  We added a dash of – you guessed it – Morton’s Nature’s Seasons and cooked for another 3 or 4 minutes, stirring occasionally.

We were careful not to let the veggies get soggy; we like them a little on the crisp side.  We set them aside off the heat until the pork chops were done.

Finally, we found some plain Greek yogurt in the refrigerator and added to it the zest of a lemon just to give it some flavor.  Don’t be intimidated by lemon zest – we just used the small side of a grater and zested/grated directly into the yogurt.  I also added a few drops of a really nice olive oil we have on hand for topping off dishes and mixed all that together.

We spread the yogurt mixture on each plate as sort of a “lining” and then spooned the sautéed vegetables onto each plate, leaving room for the pork chops.  We like to slice our chops (and steaks, chicken breasts, etc…..) before serving, but that’s a personal preference.

Anyway, we gave the chops about 5 minutes of rest time after they came off the grill and then sliced, plated, and topped the pork with the pickled radish mixture.  We also had some left over almond pieces from an earlier meal that we sprinkled on top of the whole dish just for fun, and an added dash of protein.

This turned out to be a really tasty and refreshing meal on a hot summer night, especially outside in the shade with a chilled bottle of rose wine and the setting sun.  And if pork isn’t in your freezer or your palate preference, try it with chicken breasts and I bet it would be just as good.  Enjoy! 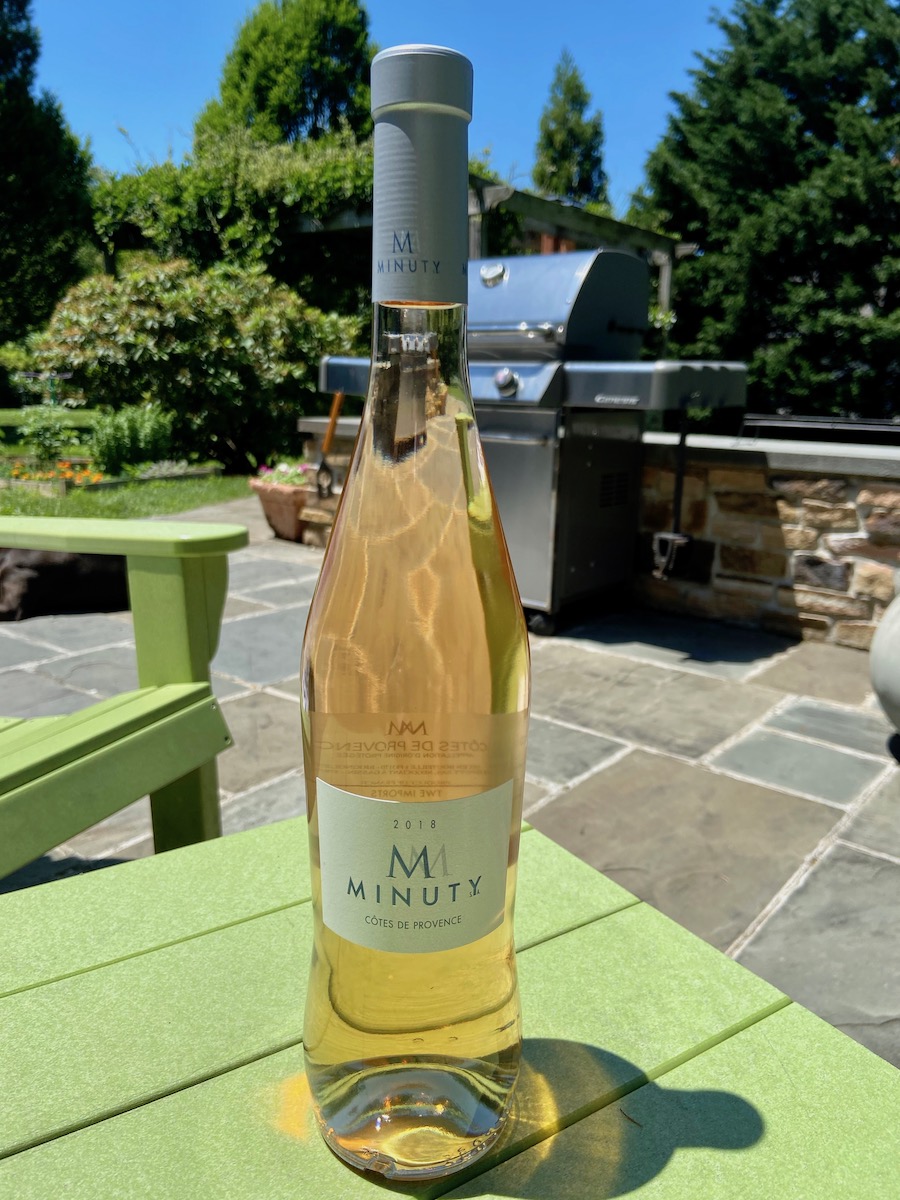 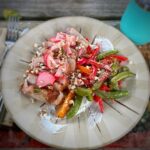 A quick and easy meal especially in the summer when your grill is fired up.
Course: Main Course
Cuisine: American
Keyword: pork
Servings: 3 people