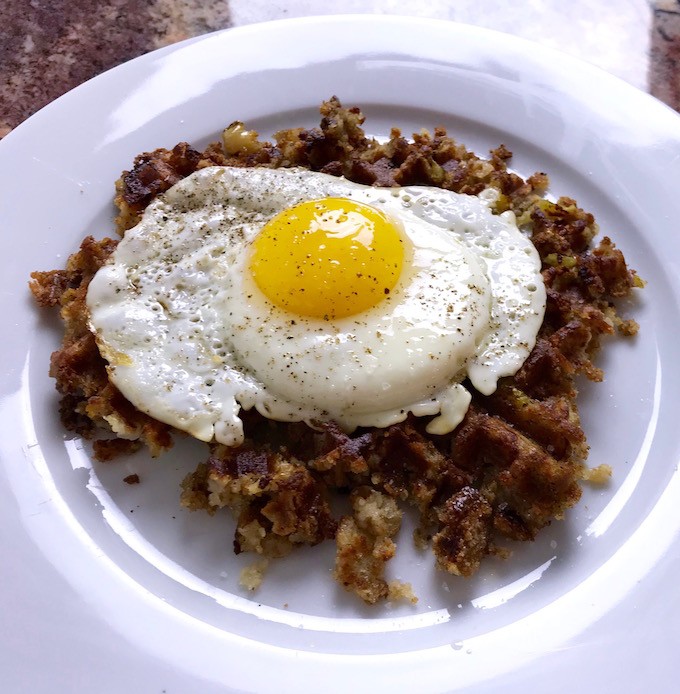 How to Make Waffles from Leftover Stuffing

My wife was listening to NPR on the radio and heard of this idea to made waffles with leftover stuffing so we decided to give it a try. It worked, but we had to experiment a few times before we achieved what we wanted.

Pam or No Pam

We thought the stuffing would stick to our waffle maker so we gave the top and bottom a quick spray to prevent sticking. The first batch of stuffing was from the cooked turkey and we found it had enough oil in it and needed no extra lubricant. The results were not good. The waffle tasted fine, but it broke up into a bunch of pieces.

The next batch of stuffing was from the casserole dish. We figured after the first attempt we didn’t need any spray Pam but because it was drier than the stuffing from the turkey, it stuck to the top of the waffle maker.

Next we tried the stuffing from the casserole dish, the drier stuff, and sprayed just the top of waffle maker and had success. Mind you, it’s not going to be as perfect looking as making waffles with waffle mix but it was good enough.  And when served with a sunny side up fried egg, the results were spectacular in my humble opinion.

When we asked my daughter what she thought about the dish, she was not as impressed as I was and said, “It tastes like stuffing with a fried egg”.

There may be more creative ways to use up leftover Thanksgiving stuffing, but this one is fun if you are willing to experiment a little.

As I'm writing this, I'm thinking if you really want to indulge and add some extra calories, a couple pieces of bacon put on top of the waffle before adding the egg would be nice. I'm passing Dr I. - she's my cardiologist.