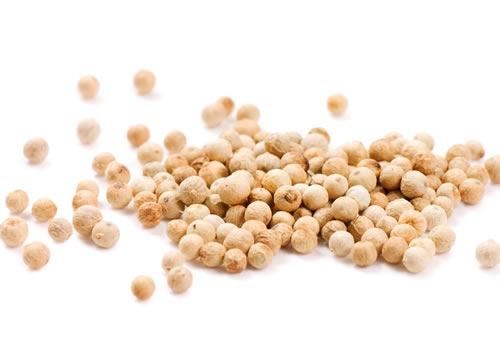 All About White Peppercorns

In some culinary circles, there is hot debate over which sort of pepper to use, white or black. Some chefs use white pepper strictly for aesthetic reasons: they use white pepper in white or light-colored dishes and sauces so there won’t be any black flecks.

Other chefs find white pepper to be a more complex yet subtle flavor than that of black pepper, which can be pretty in-your-face.

Still other chefs really dislike white pepper and refuse to use it. Famously, Jacques Pepin always disagreed with Julia Child on their show, Julia and Jacques:  Cooking at Home, regarding the use of white pepper.

Julia used white pepper for aesthetic reasons, and Jacques hated the stuff and used black. He was even willing to “suffer” black specks in his béchamel!

So what is all the fuss about? Is there really a huge difference between white and black pepper?

Are there certain times when one should be used over the other?  Honestly, the bottom line, as it so often is in cooking, is use what you like.  For those of you unfamiliar with white pepper, it comes from the same plant as black pepper.

This can be accomplished in a couple of ways.  The skins can be soaked off in water, or the skins can eventually be rinsed off by letting water flow over the peppercorns continuously.

The second method results in a much cleaner final product, although both taste very similar. After the skins are removed, the creamy white centers are dried.

Some cuisines lend themselves more naturally to one over the other.  For example, white pepper is widely used in Indian, Asian and Mexican cuisines.  To me, the food from these regions is very earthy and highly spiced.

I don’t necessarily mean “hot,” just well spiced.  Although I often use white pepper in white sauces, I really use it more for the flavor than the aesthetics.  I also love to pair white pepper with another of my favorite earthy spices, cumin.

While you can purchase ground white pepper, I recommend buying whole white peppercorns as the flavor will last much longer.  Black and white pepper both begin to lose potency upon grinding, so grinding fresh right before using will give the best pepper flavor.

Occasionally, I have seen whole white peppercorns at the grocery store, but they are usually very expensive, and they can be difficult to find.  I recommend buying them in bulk at Amazon.com where you will find a large selection.  See White Peppercorns